SO HERE WE ARE, FINALLY, PRESENTING YOU WITH THE BEST ALBUM WE WILL PROBABLY EVER MAKE.

The liner notes of "A Worthy Compensation", Beborn Beton's first album since 1999, speak volumes. Such self-confidence is not common for a band that has been silent for so long, yet insinuates that they have by no means been idle in the meantime.
When Beborn Beton's contract with their old label Strangeways was fulfilled at the turn of the millennium, the trio could realign freely. At that point the Essen-based group of Stefan Netschio (vocals), Michael Wagner (electronics) and Stefan Tillmann (programming, electronics) had established themselves as a successful act between electronic Pop and EBM, touring both in Europe as well as North America with hits such as ‚Another World', ‚Lost', ‚Little Robot' or ‚Torture'.
During the following break, they made a plan: to create an album without compromises in terms of composition and production. When this vision became reality, Beborn Beton showed a degree of consistency that, in hindsight, deserves respect. It took them more than seven years to work on new songs without cutting back on quality, carefully searching for an apt engineer and studio producer. Eventually and with the help of Olaf Wollschläger (u.a. MESH, Yello, In Strict Confidence, Seabound), they made an effort that displays maturity in all aspects and achieves the goal they had set for themselves.

"A Worthy Compensation" is a masterpiece of electronic pop - deep, timeless and melancholic with some well-dosed pathos. Songs and lyrics get under the skin in the long run, not least thanks to Olaf Wollschläger, who emphasises their strengths in an exceptional manner.
As for the album's lyrical content, the band says the following:
The carousel of life. The highs, the lows. The happy moments. The hardships:
"A WORTHY COMPENSATION… WHAT IS THAT? IT CAN MEAN DIFFERENT THINGS TO DIFFERENT PEOPLE. BASICALLY, IT IS A REWARD FOR A TASK, A BURDEN OR A PAINFUL TIME YOU HAD TO GO THROUGH. SOMETHING THAT MAKES UP FOR AN EFFORT YOU MADE. SOMETHING YOU LOOK FORWARD TO WHEN TIMES ARE NOT SO BRIGHT.
FOR US IT IS THE GIFT OF BEING ABLE TO TRAVEL THE WORLD WITH FRIENDS AND PERFORM ON STAGE WHEREVER PEOPLE WANT US TO. IT IS ALSO THE JOY OF STILL BEING ABLE TO WRITE GREAT SONGS. OF GETTING BACK OUR CREATIVE FLOW WHEN WE THOUGHT WE HAD NOTHING MORE TO SAY."
The album is immediately accessible but reveals its entire potential only after repeated listenings. Also, the band harks back to its stylistic past despite the long pause. Due to Stefan Netschio's trademark voice and Stefan Tillmann's nifty songwriting, each track conveys a unique atmosphere without sounding rushed or forced - a rare thing for music from this genre. In this way, Beborn Beton naturally bridge the gap between the 1980s and current productions.
This is the stuff masterpieces are made of.
Simply put: "A Worthy Compensation" - Let the carousel begin. 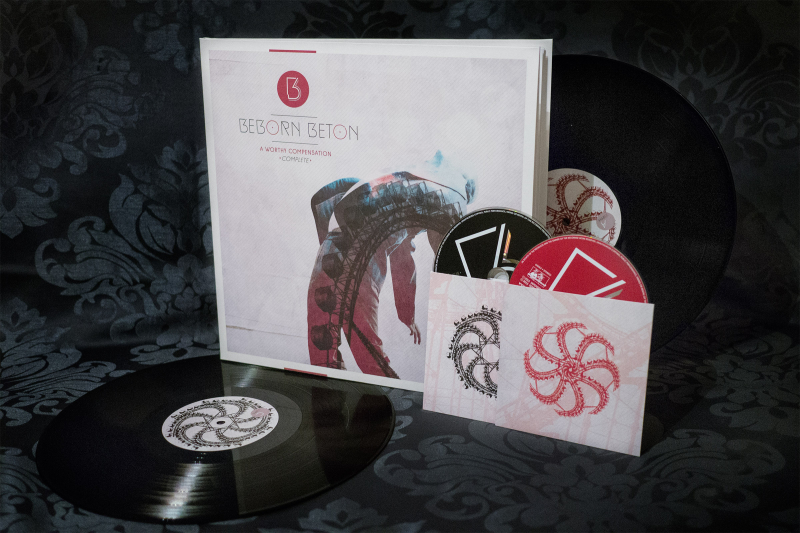