Ladies and gentlemen, welcome to the 21st century,
the century of all crisis: political, moral, economical, ecological and individual.
It is now 14 years old, but it is already old and dying.
As never before, the world has access to so much knowledge, and in the same time, as never before, the world knows so much mediocrity.
To sum up: This world is totally fucked up.

The slightly laconic undertone with which an unknown female voice greets us on the French Industrial hopefuls' new album is telling. It insinuates both boredom of and confidence in that which is going to engage the unsuspecting listener's ears during the following 55 minutes. "Personal Revolution", the third album by the French group, whose powerful performances at Maschinenfest or Terminus Festival in Canada made them an insider's tip amongst uncompromising Electro fans, does not belie expectations. "Personal Revolution" is an electronic treat par excellence, which practically assaults the listener from out of nowhere, capturing him with energy, crispness and surprising club affinity while staying heavy throughout. It cheerfully changes between Industrial, Dance, EBM and aggressive electronic composition, dodging categorisation and breaking down set barriers many others have put up for themselves - because what the intro provides us with in terms of content about the seemingly exhausted 21st century could be applied to the last decade of dark electronic music just as well: "It's totally fucked up", and those who want to clean up the mess may kindly do so alone.
Whoever endeavours a sweeping blow like this in both musical and social terms must have a lot up their sleeves, and these French have indeed: They do not care about which path they follow, whether their stunning club hits are celebrated as such or simply enjoyed due to their heaviness, if their confident lyrics inspire hope for a better society with more responsibilities for the individual or that people might just let the cleansing sonic thunderstorm wash through their ears : "Personal Revolution" works on so many different levels. It stands for a new generation of heavy electronic music, blowing away the long since festering reek like a breath of fresh air. The vocals, which do not conceal their French origin, are delivered by brothers SYCO and ARCO Trauma, who released their debut by themselves via their own label Audio Trauma. Electronic on-stage support comes from DJ, remixer and graphic designer Yoann Amnesy. The sophomore album "Don't Be Scared, It's About Life" already aroused the interest of Dependent and brought the duo a licence deal in the US, although many observers considered its thoroughgoingness as too hefty. Now with the new album, they find the golden mean because it is more song-oriented and mature but still energetic enough to vault them into a higher league. "Personal Revolution" should thus rank among the strongest Electro albums in 2014 and plainly make Chrysalide one of the hopefuls in electronic music.

Tracklist:
Personal Revolution
1. Welcome To The 21st Century
2. Question Everything
3. Tomorrow Is Too Late
4. We Are Not Cursed
5. Another Kind Of Me
6. Cynicism Is A Poison
7. It Gets In The Blood
8. Vote For Molotov
9. All Demons
10. Keep Calm
11. Beside The Impossible
12. Substance Over Style
13. Personal Revolution
14. I Had A Dream 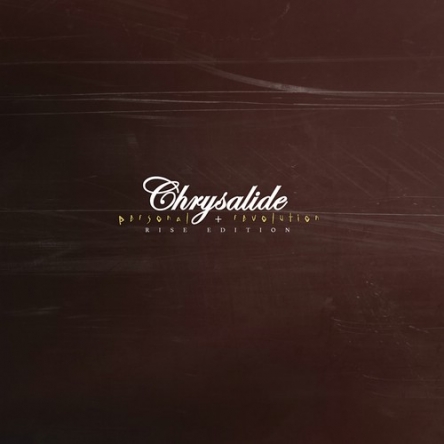